MESSAGE FROM THE CLUB PRESIDENT

A great day was had by some 35 members on Saturday as we ran the Hocking Stuart Cup for one of our major sponsors for the first time in 3 years.    A random draw provided some really even teams and some great competition all in the right spirit.   After 2 games of 7 ends we broke for lunch expertly cooked by John Murdoch with help in the kitchen from Penny Gamble and Robyn Loh.

After two games there were many teams that could make the final and so all hung on the 3rd and final game.  After the completion of the third game we had the great honour of taking club photos of all the members who represented the club with great spirit and success through the season.   It was great to see almost all bowlers attend even if they were not bowling in the Hocking Stuart Cup.    Just the effort to get to the club shows the spirit even if just for a photo…..a photo that in effect represents the success of the club in achieving its goals for the season……..not just a photo but a statement.

The final for the Hocking Stuart Cup was then played over 5 ends with most members staying for a coffee, drink or some food and to cheer on the two sides playing on the beautifully presented green. 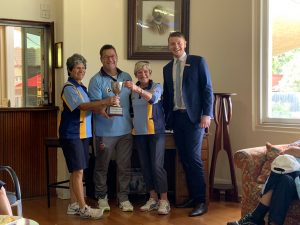 It was great to see the new faces, hope they choose to become more permanent fixtures…..welcome to Sandra and David Knott, Ron Scerri and Andy Pappas.

Hocking Stuart were well represented during the day and got to see a little of the spirit that there is around the club.

I will send out a flyer but get your buildings/ contents/ Car/Boat and for those that may have motor bikes your Bike polices out in a pile.   Put your name down for dinner and save some money and enjoy the company of your bowling friends!!!    Please support one of our most valuable sponsors by providing them the opportunity to provide us savings and generate new business for them.